Without our large selection of male style icons to draw inspiration from, we blokes would be completely clueless.

We’d have no idea what to wear, what hairstyles to get and most of us wouldn’t even know how to conduct ourselves in public.

But while we can all walk into the barbers and ask for the latest Beckham-do or go shopping in search of a jacket we’ve spied Tom Hardy wearing… there’s one thing we can’t replicate on observations alone.

Any well-dressed and refined gentleman has a signature aftershave, giving them the confidence and enigmatic mystique needed to conquer that dinner party, seize that interview or secure that date.

An invigorating scent can up your style-game tenfold and its perhaps more important than any item of clothing you care to name, making it an absolute must for the modern man.

But when it comes to choosing aftershave and fragrances, many blokes don’t even know where to start… and if you’ve not got the nose for it, picking a signature scent can occasionally lead to aromatic disaster.

Don’t worry too much though, as the choices of some of our most distinguished male icons are well-documented, meaning they are once again at hand to save the day and lend us their secrets to success.

From England to LA, here’s how some of the world’s best-dressed men, suit up and smell up… 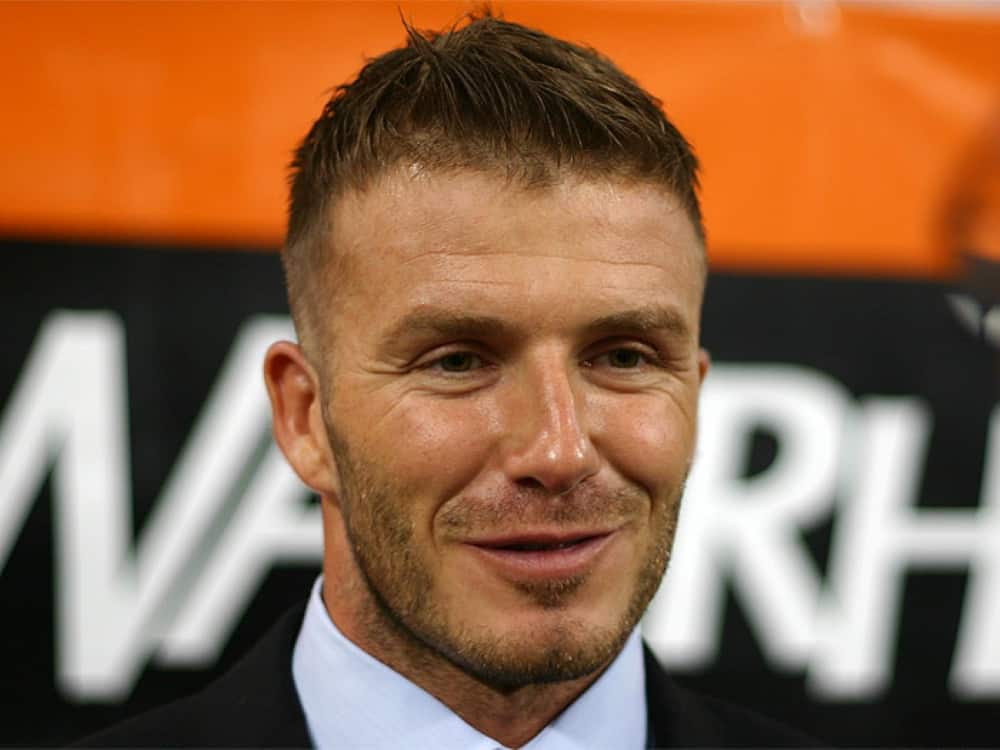 While 99% of us have never even met the right honourable Sir Becks, you just have to take one look at the man to know he absolutely reeks of refined, regal manhood.

But while you might expect the aftershave entrepreneur and former footballer to partake in his own eponymous fragrances, our David is in fact all about Creed when it comes to his olfactory flavour of choice.

Creed is more or less the definitive brand in British men’s fragrances and so it’s no surprise that Britain’s definitive man wants a piece of their fragrant flan.

Operating since 1760, former London tailoring company House of Creed first moved into the fragrance world after sending a pair of scented gloves to King George III in the same year.

Since then they’ve pleased many a King and Queen in both England and France, with both Queen Victoria and Napoleon III being known advocates of the perfumery.

This association with royalty has been crucial in helping Creed forge its legendary status and with celebrities now the royals of today, it’s clientele has become distinctly Hollywood.

While ole’ Goldenballs is known to wear their Aventus and Erolfa scents, acting heavyweights Robert Redford, Russell Crowe and heartthrob Richard Gere opt for their signature Green Irish Tweed scent, inspired by the fresh floral air of the Irish countryside. 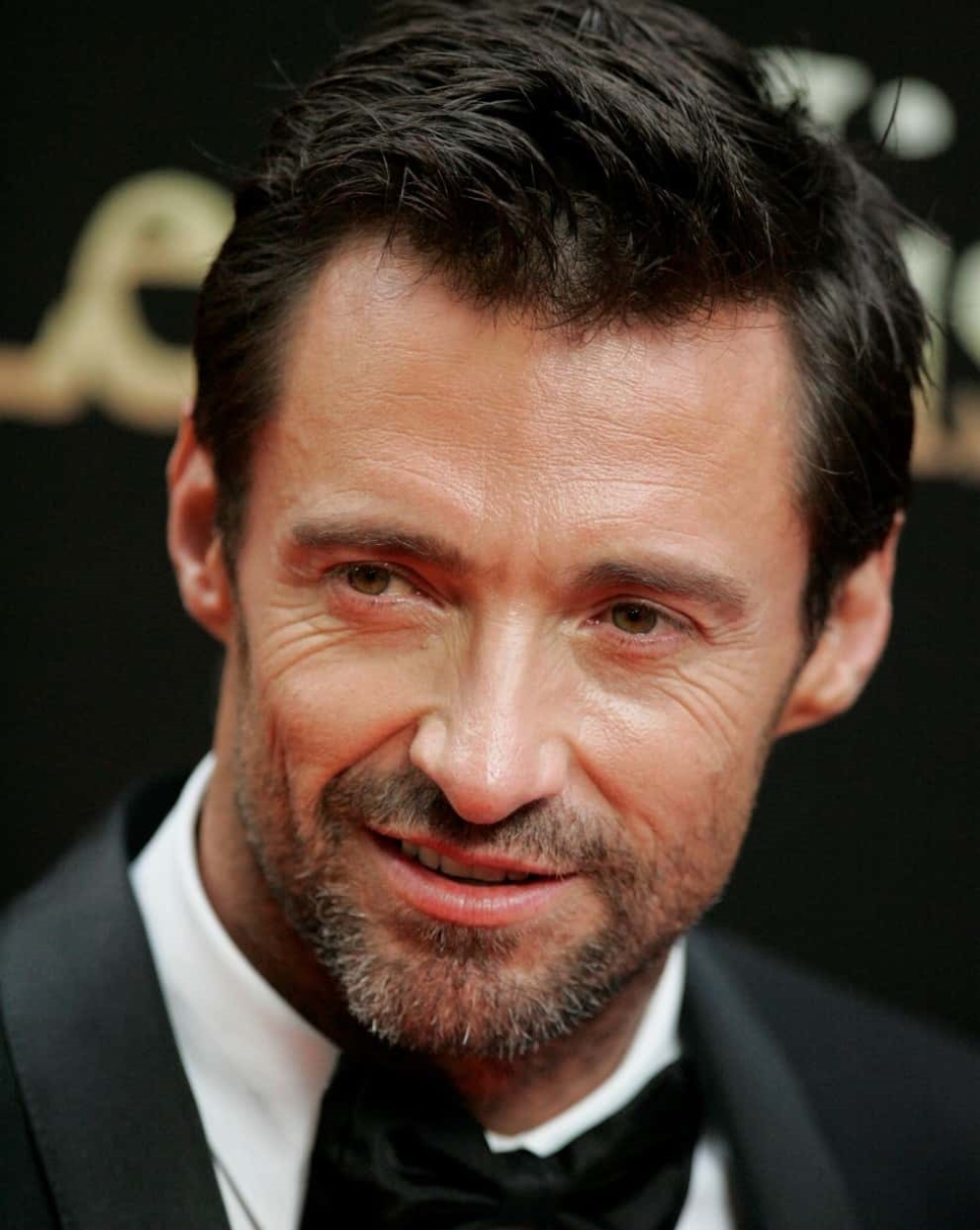 Once just a bloke with funny mutton chops and a personal sextet of hand-cutlery, the cult of Hugh Jackman has exploded in the last decade.

The body of a WWE wrestler, the singing voice of a West End star, a face that hasn’t aged in 20 years – women want him and men want to be him – it’s as simple as that.

And we’ve got bad news for the bitter and twisted fellas praying for just one imperfection… because you can now cross stinking like a pigsty off your Jackman hit list.

On the contrary, the big Aussie is an advocate of designer Tom Ford’s seductive smelling fragrances, in particular his Grey Vetiver scent which markets itself as bottled masculinity for the charismatic gentlemen.

Unlike a lot of male style icons’ fragrance of choice, this is a relatively modern pick from Hugh, who obviously isn’t afraid to seek out fresh and exciting aftershaves for the new age man.

Although classically woody in scent, it also packs a citrus punch, with grapefruit, orange blossom and earth tones throughout. 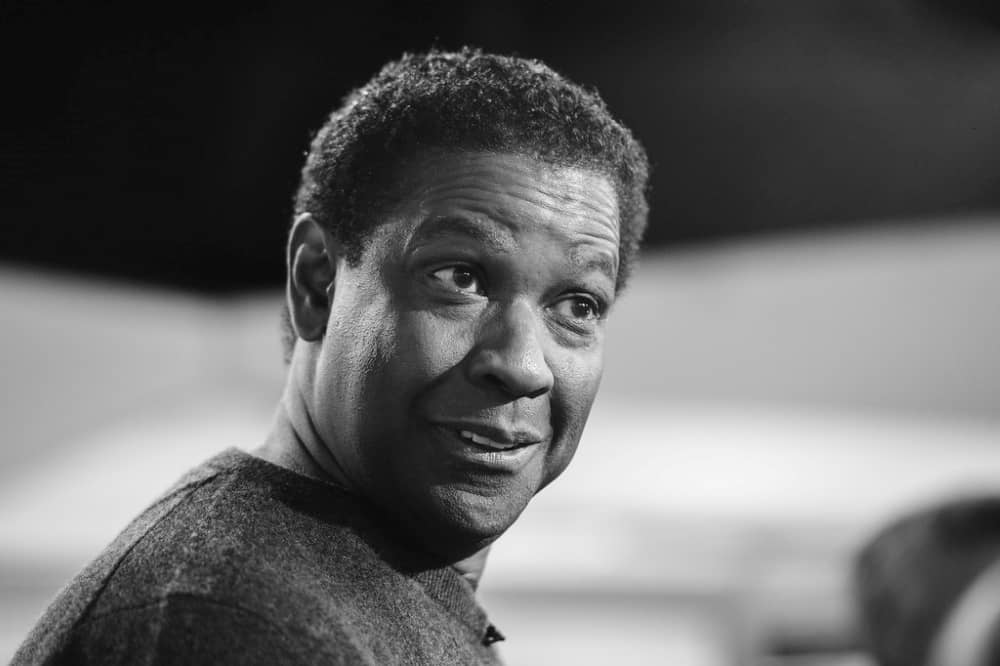 A man so dripping in charisma he should wear a swimsuit, Denzel is the man you wish you could be.

While the rest of the schmo’s on this list sport a clean-cut image and love an underwear advertisement or two, Denzel’s an icon for us men only, because he’s carved himself a legacy through his enrapturing screen presence alone.

He doesn’t need to take his shirt off to win over female fans – his dominant and distinguished persona is enough.

To even get close to matching Denzel’s magnetism, you won’t go far wrong with a bottle of Armani Code, a scent literally inspired by the man himself.

An advocate of their suits and clothing, Denzel wore an iconic midnight blue Armani tuxedo for his Oscar win in 2002, which then served as the blueprint for Armani Code’s incredibly alluring bottle.

But as well as having a striking appearance, it’s the olfactory sensations within that will truly cause a stir.

Designed to be a trio of pure, understated and yet still sensual, Code strikes the balance between seduction and sophistication, with a tonka bean and guaiac wood base surrounded by bergamot, lemon and olive tree blossom.

It’s the easiest way to unlock a little bit of that Denzel swagger you’ve been missing. 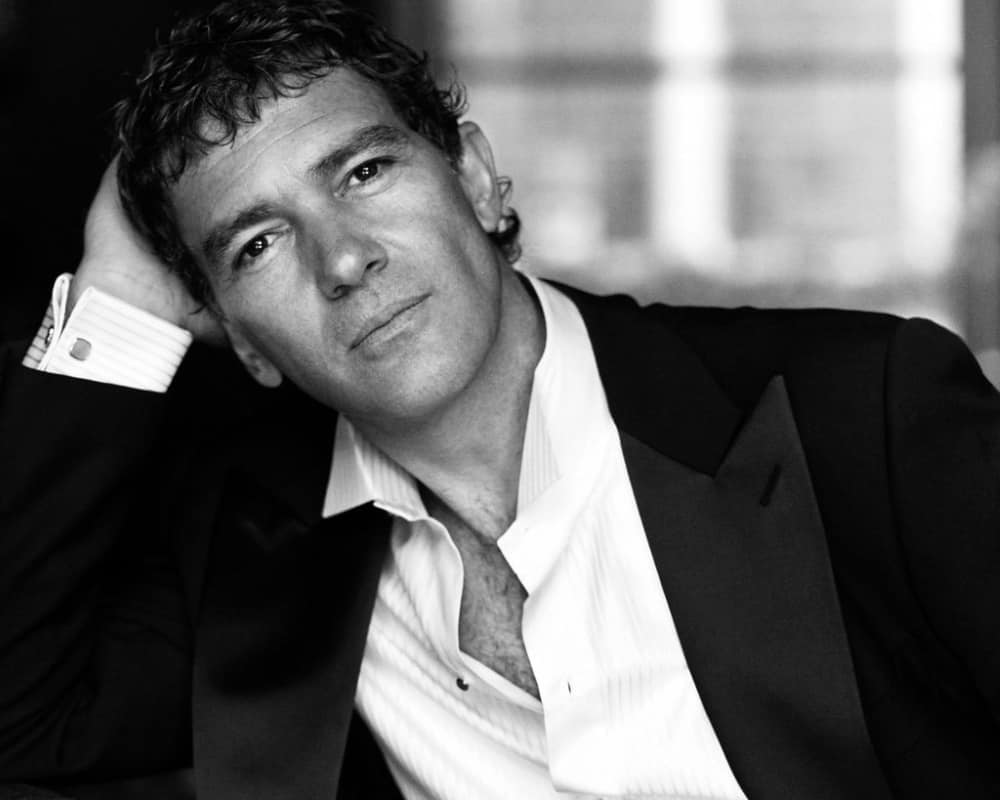 Sometimes it feels like Antonio Banderas exists just to make all other men look bad.

He’s suave and sophisticated, effortlessly stylish, has a raspy Spanish accent and even has a sexy name.

It makes it impossible for us British blokes to complete, what with our bumbling way, awkward regional dialects and horrendously boring names like John Taylor or Alan Brown.

If the roles were somehow reversed we’d be Juan Suastre or Alano Marron, Spanish bullfighters and lovers, while Antonio would be just plain old Tony Flags, and probably an accountant in Berkshire or something.

But while we can unfortunately never exude that natural Spanish bravado and allure that the Banderas cultivates, we can do our best to imitate his style and charisma, namely through nicking his signature cologne – Eau Sauvage by Christian Dior.

Unlike the new-age, sickly-sweet Johnny Depp scent aimed at today’s spice boys, the original Eau Sauvage fragrance was originally created in the 60s and is a dynamic twist on the classic aftershaves of the day.

Whereas once men’s fragrance was either distinctly woody or certifiably citrus-infused, Eau Sauvage was one of the first to pair the unpairable, matching strong oakmoss and musk with zingy lemon and rosemary.

The result is something that’s fresh and attention-grabbing, while an aroma of masculine power lingers beneath the top notes, just waiting to be discovered. 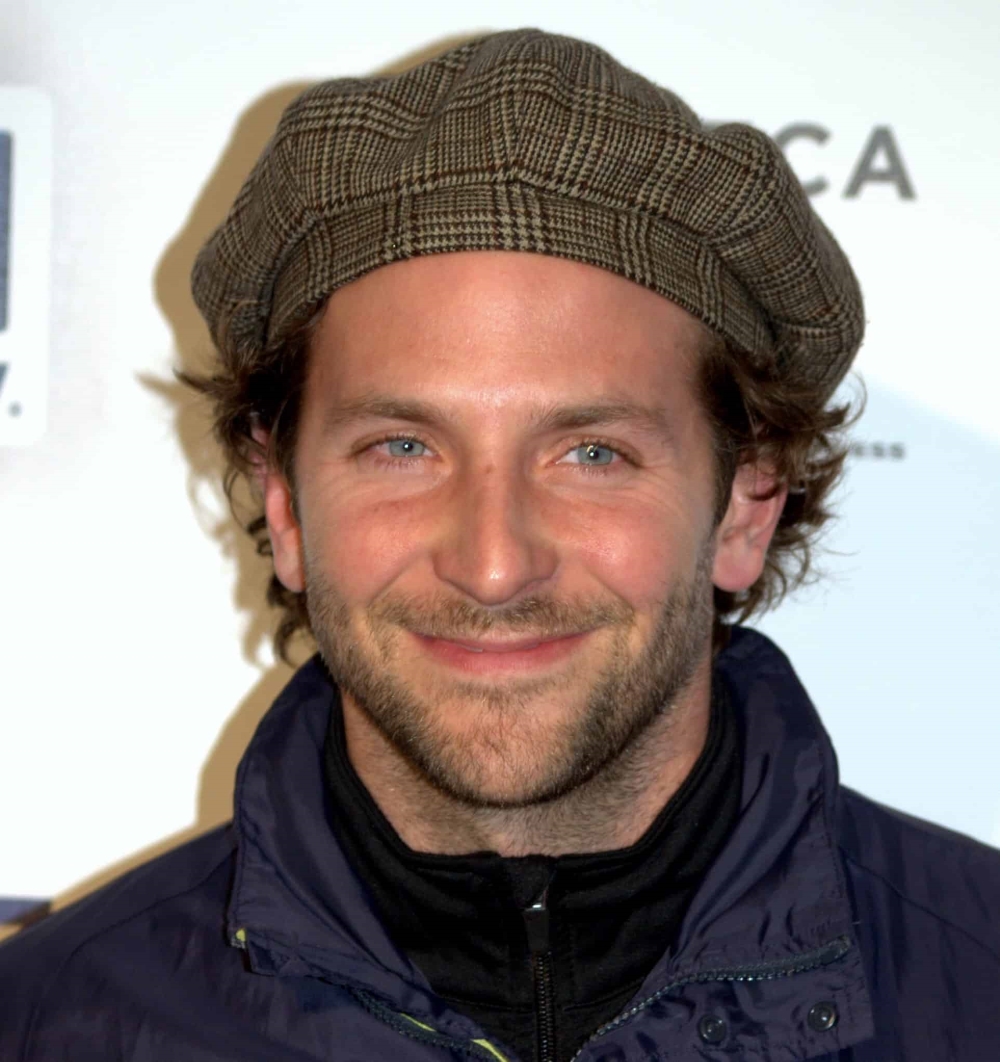 Once a beloved fragrance amongst the Hollywood Golden Age, Italian perfumers Acqua Di Parma were the scents behind screen icons Cary Grant and Gregory Peck, two gentlemen who personify what it means to be rugged, dapper and distinguished.

But just when we thought there were no more men like them, Bradley Cooper came along, maintaining their legacy both on screen and in smell!

That’s because he too is flying the flag for the Italian scent makers, who pride themselves on their signature scent Colonia, designed to bring an intense and elegant flair to a gentleman’s aura.

Using the very best of the Mediterranean’s finest ingredients, it combines citrus top notes with a floral body of rosemary and lavender before hitting powerful wooden base notes of vetiver, patchouli and sandal.

As one of our beardiest male superstars, Bradley is most fond of the Acqua Di Parma Barbiere range, specifically created for taming your facial fuzz and giving it a subtle but sumptuous scent. 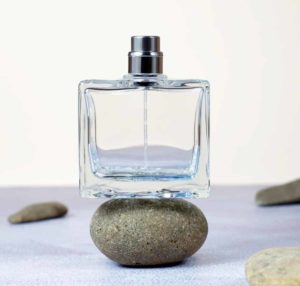 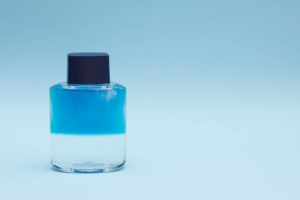 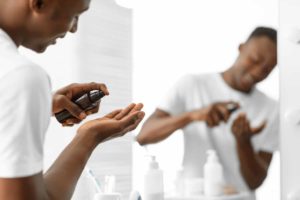