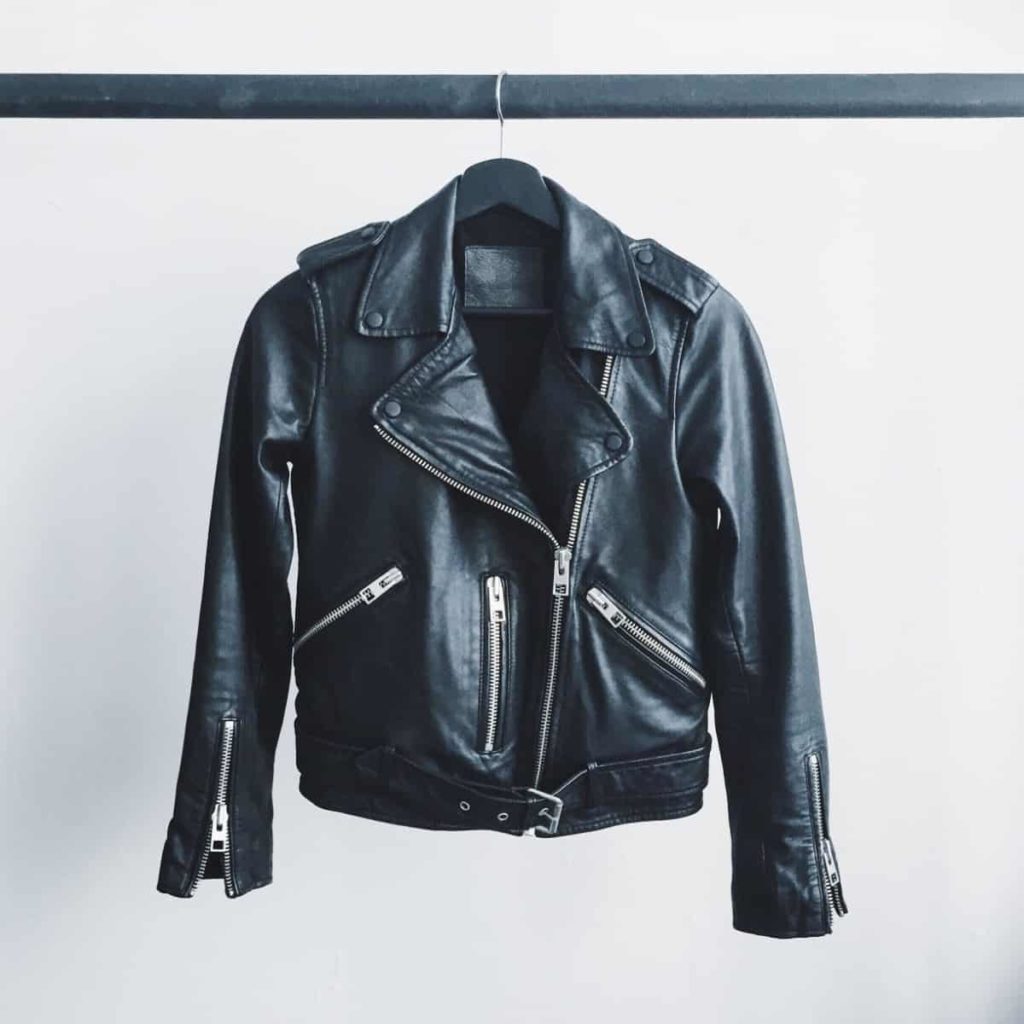 Deciding that you want to start wearing a leather jacket is a bit like choosing hang gliding as your next hobby.

Best-case scenario? It could be the greatest decision of your life, the jacket helping you soar to new unparalleled heights of sophistication and swagger.

You’ll literally ooze self-confidence and masculinity, while everyone around you fades into obscurity.

But in the worst-case scenario?

Well in the worst-case scenario you’ll die a horrible, tragic death; plummeting thousands of feet down the hierarchy of fashion and killing all of your credibility instantly.

At your funeral, people will whisper to each other… “A leather jacket?! How could he be so stupid… Did he not know the risks?”

While we’ll admit the hang gliding metaphor lost its way towards the end there, you get the overall picture…

The leather jacket is a poisoned chalice containing the elixir of life – do you dare to drink from it? Can you do so without being burned?

The definitive clothing item for male icons, rebels without a cause and certified sex symbols, a leather jacket has always been the easiest way for fellas of a certain calibre to unlock unrivalled charisma. And if worn correctly, it can literally be a substitute for a personality.

But it’s for those same reasons that the leather jacket has also become a kind of El Dorado for middle-aged day drinkers at Wetherspoons, gawky teenagers buying their clothes for the first time… and perverts, all desperately trying to become something they’re not.

Yes, it’s a fine line between aloof and a fool, and knowing how to navigate it can be tricky.

But if we haven’t put you off already, don’t ditch your visions of leathery grandeur just yet – as there’s always a way to make a leather jacket work for you.

How To Choose A Leather Jacket

Ultimately, making an LJ work is about finding a style which suits your look and personality.

You might dream of being the leader of a hardcore motorcycle gang, but sensitive accountants from Woking aren’t revered for their stick-it-to-the-man attitude – so why chase the bad boy image if it’s at odds with who you are?

This is where the different cuts of leather jacket come in handy, as they still offer all the suave and sophistication, but do away with aspects that clash with your aura.

Age, appearance, outfit preferences and more will all play their part in deciding what will and won’t work for you, so it’s vital you get acquainted with all of them so you can make the right decision… 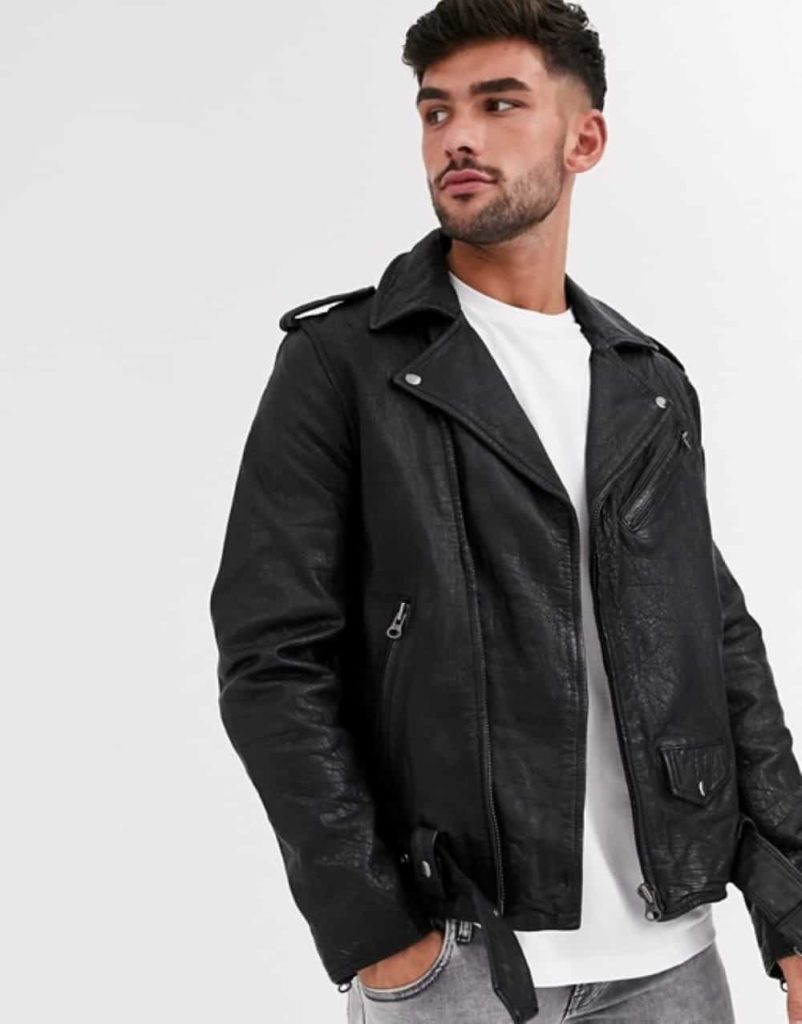 The absolute pinnacle of leather jackets, the biker style has been a staple of young men’s fashion for almost a century and is a kind of calling card for rule-breaking, care-free scoundrels.

Originally designed for motorcycle wear (shock), they are usually a cropped design in deepest black, with studs, unusual asymmetric zips, large lapels and sometimes a belted body – always ensuring they are a huge fashion statement.

Its famous wearers have included James Dean, Marlon Brando and Johnny Depp, all men completely synonymous with the word cool… but perhaps the only reason they ever achieved such status was thanks to the revolutionary cut of their clothing?

Just look at The Ramones for example, a gang of the oddest, geekiest blokes you’ve ever seen… but with biker jackets on their shoulders, they suddenly became the new face of American punk rock.

With a reputation as a rebel garment, we’d only recommend the biker style for supremely confident younger men who aren’t afraid to show a little edge.

As the jacket is doing a lot of eye-catching attention, it’s also better suited to lads who keep things simple elsewhere in the wardrobe department. Slim jeans and plain white T’s are the go-to looks, with many opting to finish things off with a pair of fashionable leather boots. 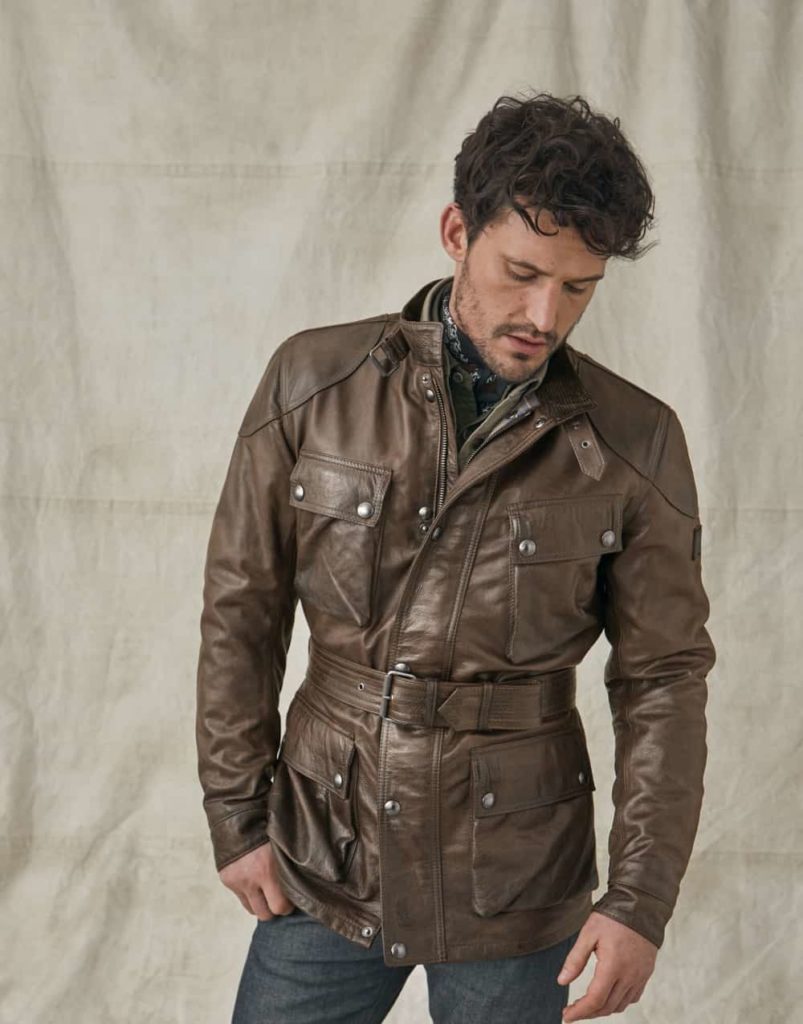 Okay, maturer men, this one’s for you.

You already know the stereotype, you’ve heard all the jokes… but now it’s happening to you.

You’re having a midlife crisis and you want a leather jacket.

But how do you buy one… wear one… and not look like that’s exactly what’s happening?

A leather jacket is meant to be a statement of the power and masculinity still within you, and you want to look like a rugged silver fox as opposed to someone dressed as Danny Zuko for an 80’s nostalgia party.

The trick here is to choose a style that brings out your mature qualities, as picking edgy cuts screams of a man trying to reclaim his youth and cling onto the past.

Instead, we suggest plumping for the Field Jacket, a distinguished British classic, that evokes connotations of adventure and a free-spirit.

It’s time to give up chasing boy’s gear – because this is a real man’s leather jacket.

Rather than being rebellious and garish, it’s functional and finely-crafted, with a fashionable belt design and four-front facing pockets. A non-cropped waist also means it can sometimes border on becoming a coat, pairing well with sweaters, trousers and boot combos. 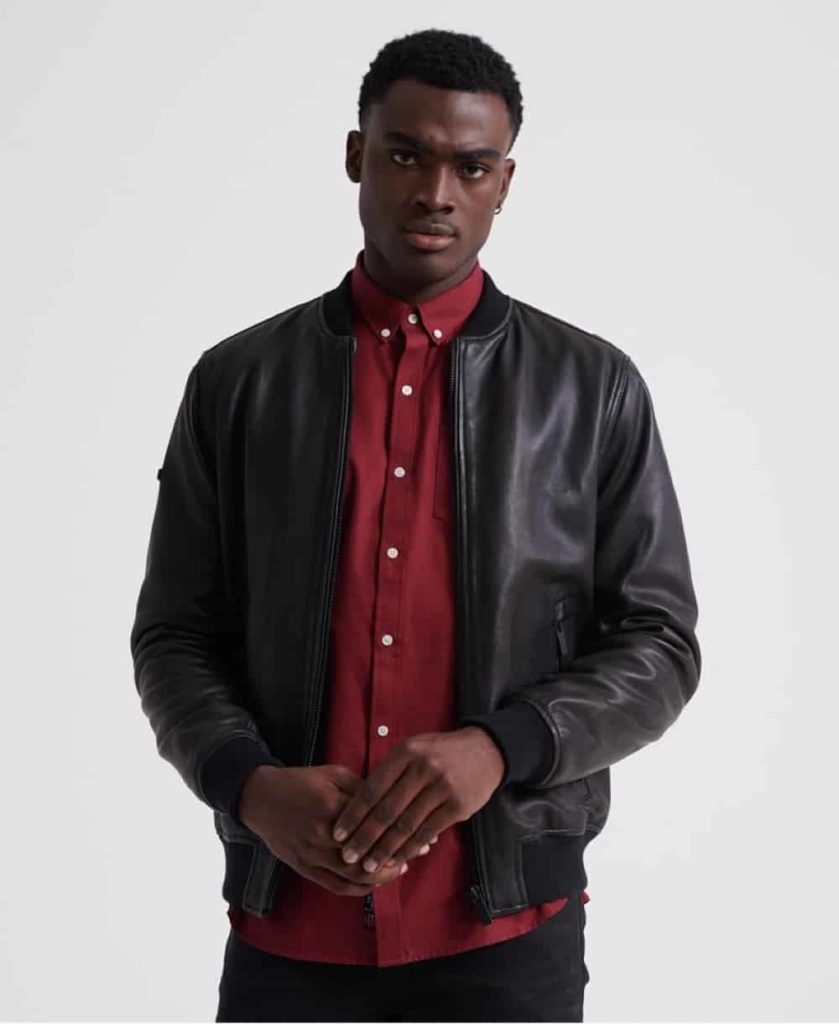 Also known as an aviator jacket, leather bombers have both a brilliant and cursed reputation in the current fashion world – so always be careful when reaching for one.

Back in 1963, movie star Steve McQueen became the most iconic sartorial tastemaker in the world when appearing in The Great Escape, and he did it almost entirely with an aviator jacket.

Sporting a more boxy shape, bombers were originally created to keep pilots warm in a cockpit without sacrificing their movement, but they later became yet another symbol of swagger thanks to McQueen’s Nazi-busting exploits.

They evoke a fantastic devil-may-care attitude for those who love a vintage aesthetic and they’re incredibly versatile too, as they can be worn in summer or winter without looking out of place.

Unfortunately though, they’re also something of a go-to choice for older men and probably the clothing item that helped create the mid-life crisis stereotype.

For that reason, we’d suggest maturer men flat out avoid them, as should much younger men who don’t want to look like they’re borrowing grandad’s old LJ. Instead, it’s the perfect choice for stylish men in their 30’s – McQueen’s age when he donned the classic himself.

It takes someone of distinguishing years to pull this number off, yet they still need some rebellious youth about them to avoid guffaws. 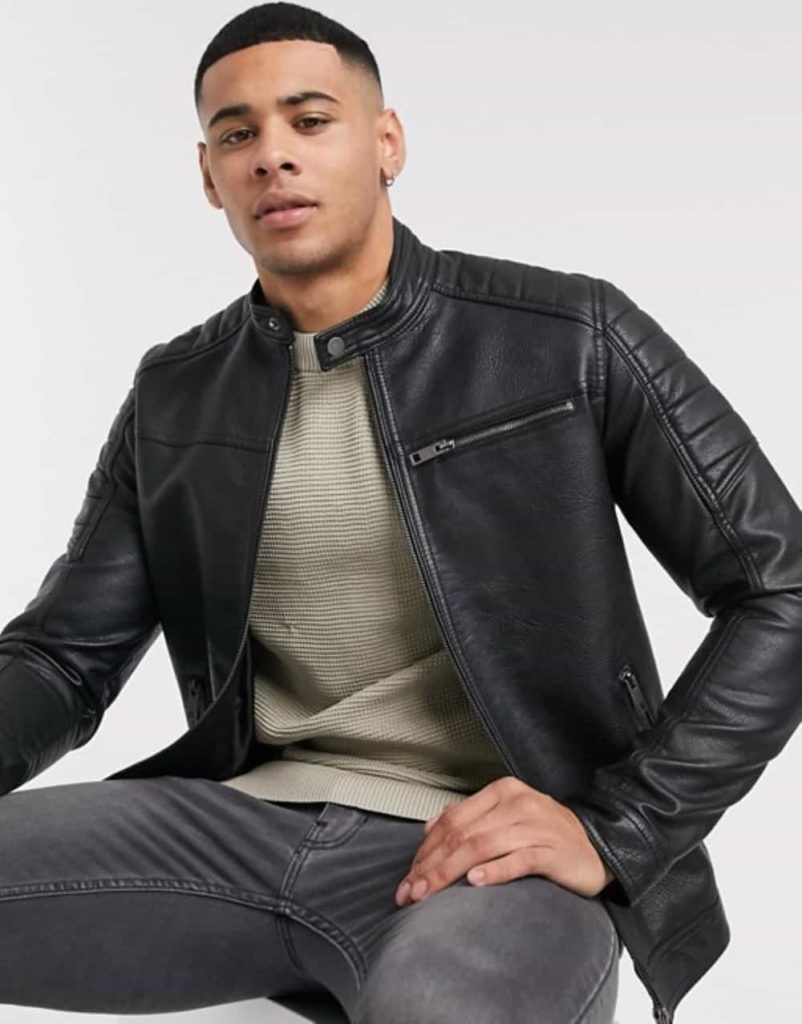 Probably the most most common LJ look after the classic biker, cafe racer jackets are a hip, sleek and slimline style that’s increasingly becoming the most popular choice.

In essence, it’s the young man’s bomber, boasting a really casual cut whilst bringing all the edge and attitude of the biker jacket.

But while biker jackets are the apparel of outsiders, punks and rebels –  racers are a garment for people who already know their cool – acting as a mere cherry on top of the cake rather than a frosted icing.

They’re inherently sporty in style and so for sleek lads who like a night out on the town, the racer jacket is a great way to get yourself a mature, mysterious image and stand out from the spice boys.

Due to being lightweight and low on design features, they’re also easy to slot in with almost any outfit – a plain jacket that simply lets the leather sing. 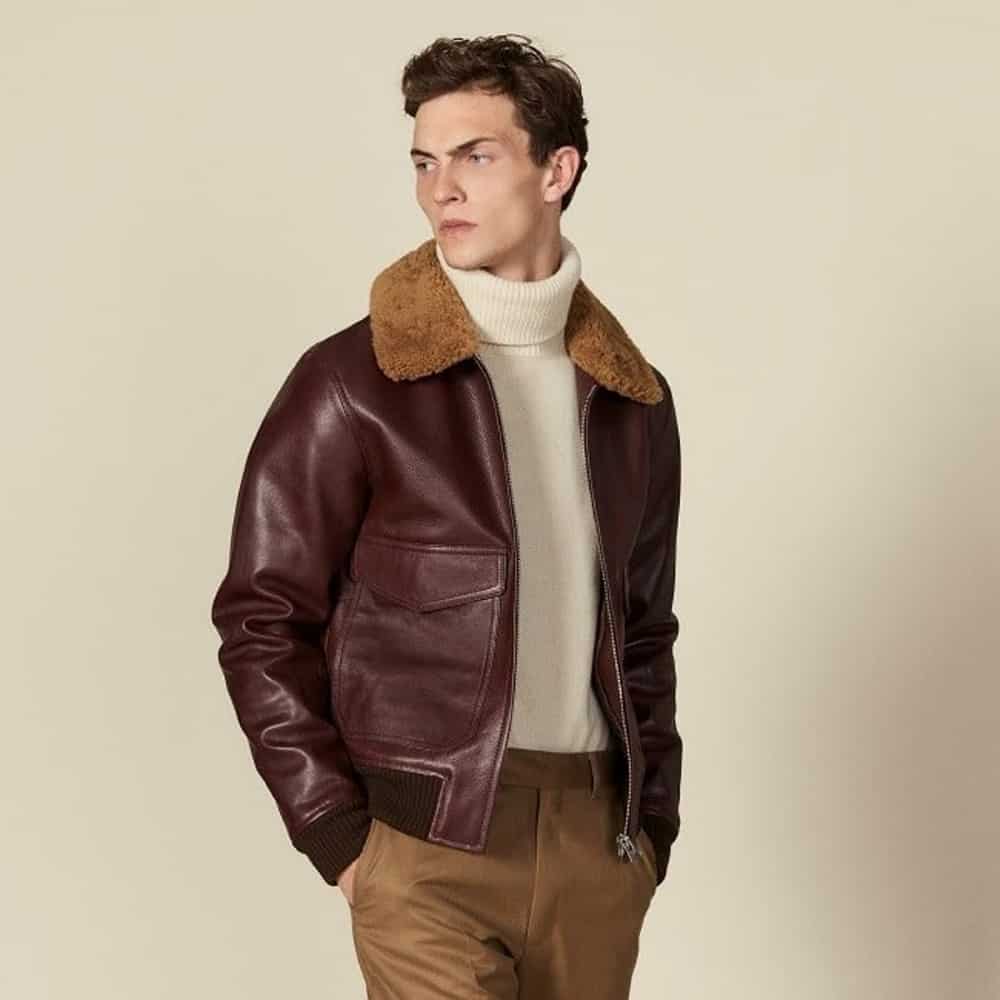 Another fantastically mature look, classic shearling-collared flight jackets have come back into the public fashion-conscious thanks to older advocates like Tom Hardy, proving that we older blokes can look good in leather too.

Like the field jacket, they are a statement of power and masculinity rather than a pitiful attempt at edginess or cooldom, meaning they’re a good pick for older gents due to their vintage R.A.F vibes.

If none of the traditional styles above work for you, then you’re going to have to do a bit of venturing on your own.

However, given that leather is the most premium and beloved material in menswear, you shouldn’t have to look too hard to find a completely unique cut that fits the bill for you.

These days, almost every style of jacket comes in a leather option, meaning a quick scour through the internet is sure to unearth the prized garment of your fantasies.

Hell, there’s probably even leather parkas that exist if that floats your boat – all you’ve got to do is search.

Google is your friend guys, get looking!

As if being vegan wasn’t enough of a faff already, imagine learning that it’s not just steaks and burgers that are off the menu.

Due to their strict rawhide nature, leather goods are the absolute antithesis of animal-friendly and so unless you want to be labelled a big fat hypocrite by your tofu-munching mates, you’ll have to stay well clear.

But even vegans won’t be denied the alluring power of leather these days, with faux leather becoming an increasingly popular option.

A sort of fancy, French way to say fake, LJ purists will tell you that faux leather is a cheap, naff and shiny material that can’t compete with the real deal and while we tend to agree – there are exceptions!

Although less durable, faux styles tend to be a much lighter weight and thinner style material, meaning they’re often a better fit for slimline men, reducing the risk of being drowned in bulky material.

Ultimately though, they won’t last you a lifetime unlike their evil animal hide cousin, so we’d only recommend them if animal-welfare is at the front of your thoughts when clothes shopping. 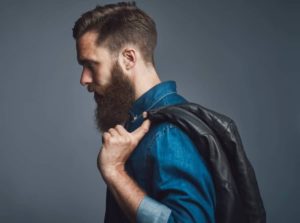 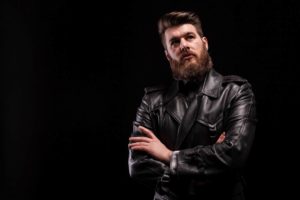 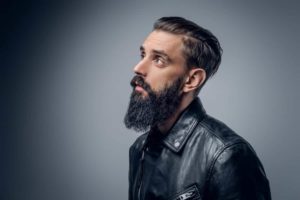 Distressing a leather jacket: 5 ways to get vintage quick