Do you have the cojones to face the world’s 10 hottest hot sauces? 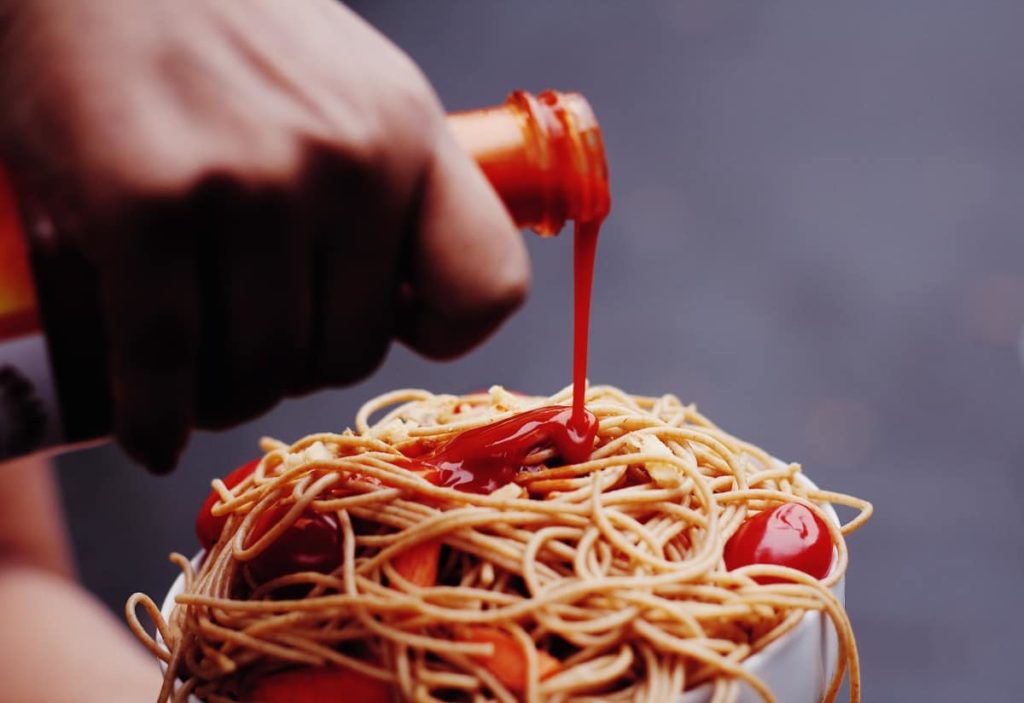 Where would we men be today if it weren’t for the hot sauce? – life’s little additive that puts hairs on the chest and gives fellas both a figurative and literal kick up the arse (especially on exit).

With the vast majority of UK meals being so bland they’re beyond comprehension, we’d be lost without our trusty flasks of flame; forced to drown in the unpleasant marshes of Monday’s cottage pie forever.

But after accepting spice as our lord and saviour, blokes from Land’s End to John O’Groats have finally found salvation in edible napalm, arming our fridges with tantalising tongue tinglers and sufficiently nuking bog standard meat and two veg into high heaven.

Though alas, where once we were a merry fellowship of zing searchers and flavour fans, toxic masculinity has meant that buying a bottle of hot sauce is no longer about seeking excitement or doing battle with the duller dishes.

No… it’s about taking yourself to the very depths of torture and hurtling through your pain barrier faster than Chuck Yeager can say “Lake of Arse Fire”. 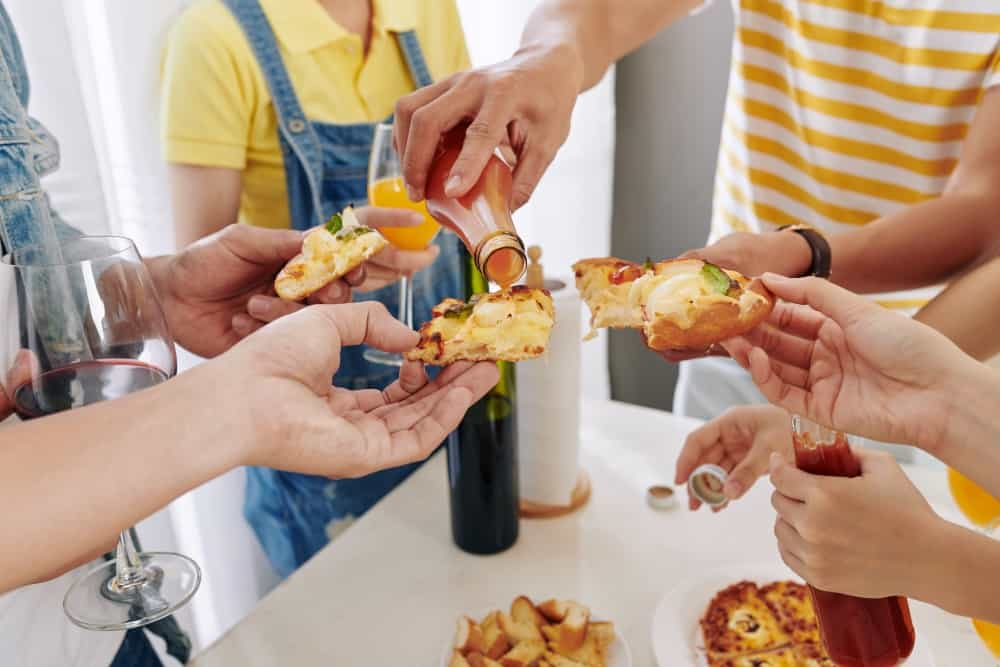 Thus the search for the very hottest hot sauce is now a holy grail sought by many a male treasure seeker, all desperate to discover the ninth gate of spice – an El Dorado or Atlantis of pure hellfire.

And we hate to break it to any of you would-be-Walter-Raleigh’s out there – but we’ve already found it, along with nine other oral harbingers prophesied to bring the world into a soul-splintering Armageddon of spice.

Dare you seek them out too? Dare you even read on?

How We Found The 10 Hottest Hot Sauces

Seasoned chilliheads are well versed on the kind of firepower a hot sauce is packing based on it’s Scoville rating (SHU), the official accreditation which ranks pure chilli peppers on how much heat they emit on taste.

For example, your standard bell pepper is somewhere between 0-100 SHU, as of course, it basically packs no punch at all.

Tabasco peppers though (yes, the ones behind your favourite pizza dressing) rank at about 30,000-50,000 SHU, as they are pretty darn spicy.

However, this is still child’s play compared with what we’re looking for.

The very hottest chillies in the world harness truly frightening powers of well over a million Scoville’s, with the worst on record being the Pepper X, the California Reaper and Dragon’s Breath.

When you consider that anything over 1,000,000 SHU is experienced by the body as just pure pain and nothing else – this is seriously scary stuff. 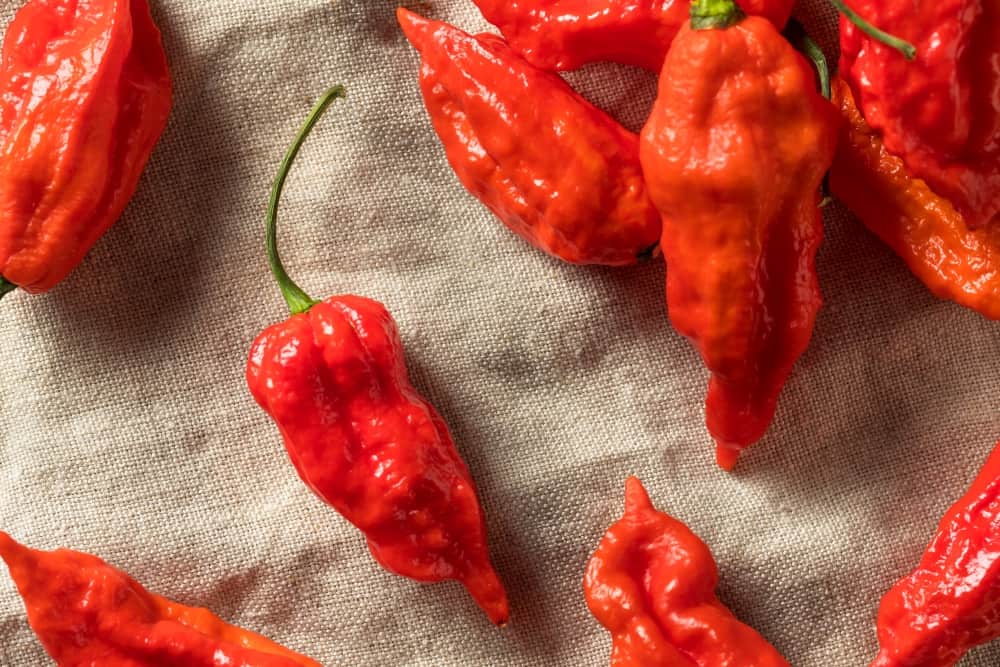 Naturally then, we didn’t even consider a single hot sauce under 2 million SHU.

We should also warn you that some of these hot sauces are far more potent and oesophagus destroying than even the Pepper X, so please know now they are not for fun and games and aren’t to be trifled with.

That’s because Scoville ratings are based on a pepper’s naturally occurring capsaicin, the active component in their chemical makeup which constitutes the burning, irritant reaction when coming into contact with tissue.

But as hot sauces are man-made, there is no limit to the amount of concentrated capsaicin that can be put in one bottle.

As a result, brands looking for the crown of world’s hottest hot sauce will stop at nothing when it comes to pushing the very limits of capsaicin content, meaning the crown will probably change hands more times than in Game Of Thrones until some poor fella officially dies by Scoville.

But hey, isn’t an NDE what hot sauce is all about these days?

The 10 Hottest Hot Sauces In The World

Think Cholula, Frank, Encona and the girls are all hot stuff? Think again.

Those brands are babbling, pathetic toddlers in a world of hardened hot sauce criminals – bandits who will rob and strip you of your very essence, all while delivering repeatedly more aggressive kicks to your stomach when you’re already down.

So without further ado, let’s push that big red button and let the countdown to your post-nuclear taste bud dystopia begin… 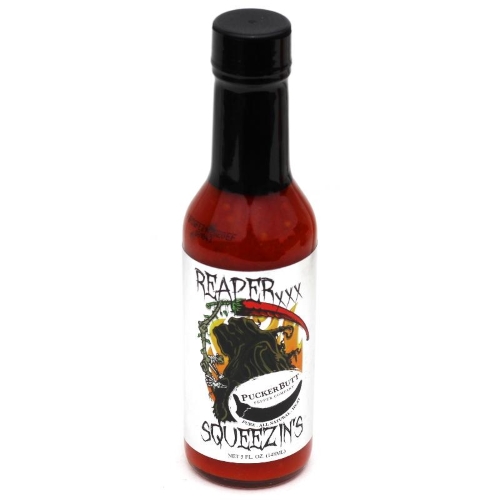 Hot sauces aren’t shy about implying or alluding to the fact they are a dance with death, with many claiming to be blood directly drawn from Father Time himself.

But while the idea of a dice with Death is an amusing one, Puckerbutt’s Reaper Squeezins isn’t afraid to also combine that allusion with the harsh reality of a sauce’s passage through your underworld – a much graver and more real meeting between yourself and the toilet once consumed. Pucker your butt indeed.

At 2.2 million Scoville’s, the sauce was created by actual Carolina Reaper inventor ‘Smokin’ Ed Currie, meaning it’s a great way to sample the authentic heat and flavour of the original Scoville-busting peppers, grown by the devil himself! 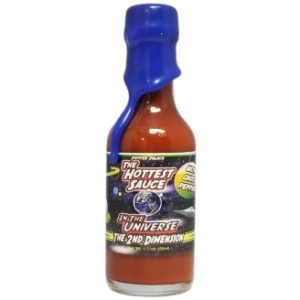 We warned you that we weren’t messing about and if you’re paying attention, you’ll have spotted that in one spicy swoop we’ve already left earth and broken through the Scoville stratosphere by well over a million points.

Other-worldly in experience thanks to its pain-inducing composition, each bottle of Pepper Palace is made with 40 pounds of ghost chilli peppers, a plant scarier than any actual poltergeist.

If this doesn’t send you to another dimension, you’ll at a minimum have some kind of capsaicin-induced fever dream thanks to its ferocious 3.5 million SHU. 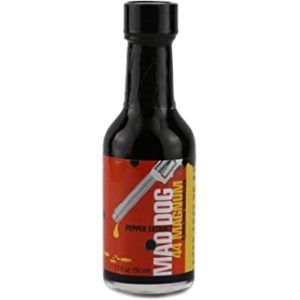 Once the most powerful handgun in the world, the .44 Magnum is a fitting name for this 4 million SHU whopper from Mad Dog, kings of tongue-deadening hot sauce experiences.

Mad Dog are the sort of terrifying brand that border on creating edible sadism, and believe it or not, this is one of the milder, more manageable condiments in their range.

Like a gunshot straight to the gob, this is one hot sauce you won’t be in a rush to reload. 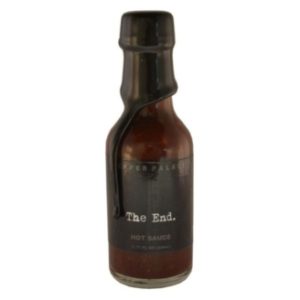 At number 7, we start to hit a bit of a plateau when it comes to increasing Scoville ratings.

That’s because at this point, the amount of heat we’re working with is just becoming downright nasty and unpleasant – akin to willingly putting yourself through a gruesome trial from the Saw franchise.

6 million Scoville’s is where warning labels and dosage recommendations start to come in and when a hot sauce is starting to be over 50% capsaicin concentrate.

This means it often shouldn’t even really be classed as a sauce anymore, as we’re reaching the stage where it’s only really safe to use as a food additive!

This classy black bottle from Pepper Palace is a great example, appropriately baptising itself as The End.

Made of Carolina Reapers and Habaneros, if their 2nd dimension sauce was a mind-altering journey through space, this is just a self-destruct rocket ride into the centre of the sun.

A pure, black abyss of hurt. 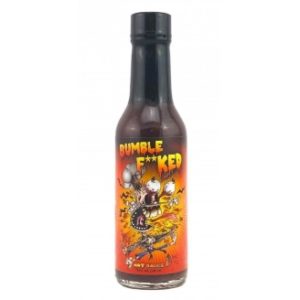 We don’t recommend googling this term at work, as an innocent search for this hot sauce often brings up a lot of interesting sites, none of them really concerned with spicy condiments.

Don’t worry too much though, as Bumblef***ed is merely an innocent butchering of the name for the hot sauce’s company: Bumblefoot, a brand founded and named after former Guns N Roses guitarist Ron ‘Bumblefoot’ Thal.

The pride and joy of Bumblefoot’s range, Bumblef***d is a 6 million Scoville hot sauce created to help incinerate your insides and is just as nasty, aggressive and upsetting as it sounds.

We’ll take a hard pass on this one. 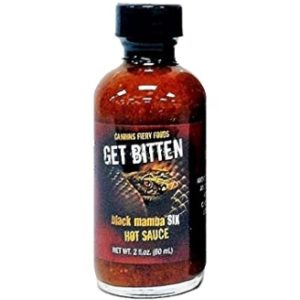 Hands up if you’ve ever wanted to feel like a venomous snake has just bitten into your tongue!

But in what might be the oddest marketing ploy of all time, that’s exactly what this CaJohns hot sauce is offering, literally calling itself Get Bitten Black Mamba sauce.

As the actual bite of a Mamba would just flat out kill you, this sauce is obviously a little less lethal, but don’t be fooled into thinking it’s some kind of cheap, over-exaggerated advertising.

At 6 million Scoville’s, this sauce wants you to suffer beyond the limits of your imagination and would consider your tongue shrivelling up and dying a huge success.

Ow isn’t even the word. 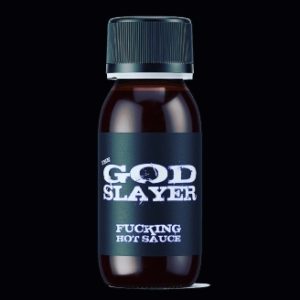 “God is dead… and we have killed him” – Friedrich Nietzsche 1882

But what Freddy forgot to add to his oft-quoted thunker was the cause of death.

As it turns out, it was this very sauce which was the final nail in the coffin for our immortal supreme leader.

Made right here in the UK, this corrosive condiment from Wiltshire Chilli Farm has been crafted with habaneros, ghost peppers and a sanctimonious 6.4 million Scoville oleoresin, so powerful it removes the fear in God.

Forget losing your sanity, this abomination will make you lose your religion. 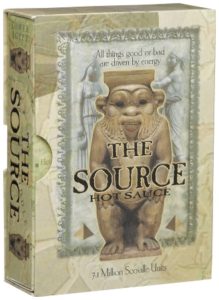 A really woeful pun and easily the least fun hot sauce on the list, The Source doesn’t really care if you’re having a good time or not.

It doesn’t want to be your friend or impress your mates with scary cartoons and ridiculous hell-inspired monikers, but it’s that unassuming nature which makes it all the more disturbing.

Coming in a kind of ancient relic packaging, it’s the sort of interesting but ultimately cursed artefact some kids might find in an attic or museum in every 90’s adventure movie ever.

The bottle then features an actual legal disclaimer, ensuring anyone who subjects themselves to it’s evil can’t sue the food company should it do reprehensible damage to the inside or outside of the body.

In short, don’t even bother hunting down this bottle of burn, as using it as anything more than a food additive will just put you in the hospital. 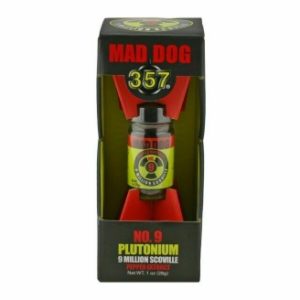 Probably the widest available ‘hottest’ hot sauce on the market (and even then it’s tough to get your mitts on), Mad Dog 357 Plutonium No. 9 sounds like the secret element a James Bond baddie might use to create the next world-ending WMD.

Made of 60% pure capsicum, this stuff is just barbaric and at 9 million Scoville’s has absolutely no place going anywhere near your little finger, never mind your gob.

Once again, there’s warnings abound all over this one, covering itself with nuclear symbols and stressing clearly that when it comes to dosage it’s a choice between food additive or a trip to A&E.

You’ve seen the effects of Little Boy and Fat Man… and this oral nuke may be the Morbidly Obese Geriatric you’ve been looking for. 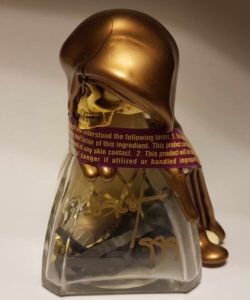 As far as we’re concerned, we should have been at number one a few million Scoville’s ago, or at least have given up at the point where this list became barely edible ‘extracts’ rather than actual sauces.

Yet we haven’t even touched the surface as to how far these maniacal professors of peppers are willing to go.

A testament to the mentally disturbed mission of hot sauce brands, Blair’s reserve collection is a slowly, ever increasing range of hot sauces and capsicum reserves that stretch to the edges of legality.

Blair is a well-known hot sauce creator, but bottles from the reserve collection are rare and uncommon, often being made in batches as low as 1,000 bottles. This means they are all highly sought after by chillihead collectors and can often sell for thousands of pounds at auction.

The current, most lethal edition was the 16 million reserve, which was pretty much just pure capsaicin crystals, needing a dilution at a ratio of 1:1000 in order to be edible. In the wrong hands, it could probably end a life.

According to the Guinness Book of World Records, it’s unsurprisingly the hottest Scoville product ever available for purchase and with only 999 bottles ever made, it’s probably a good thing you’ll struggle to get your hands on it. 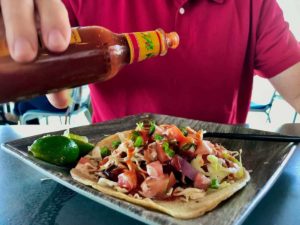 Best hot sauces for chilliheads and Hot Ones fans!